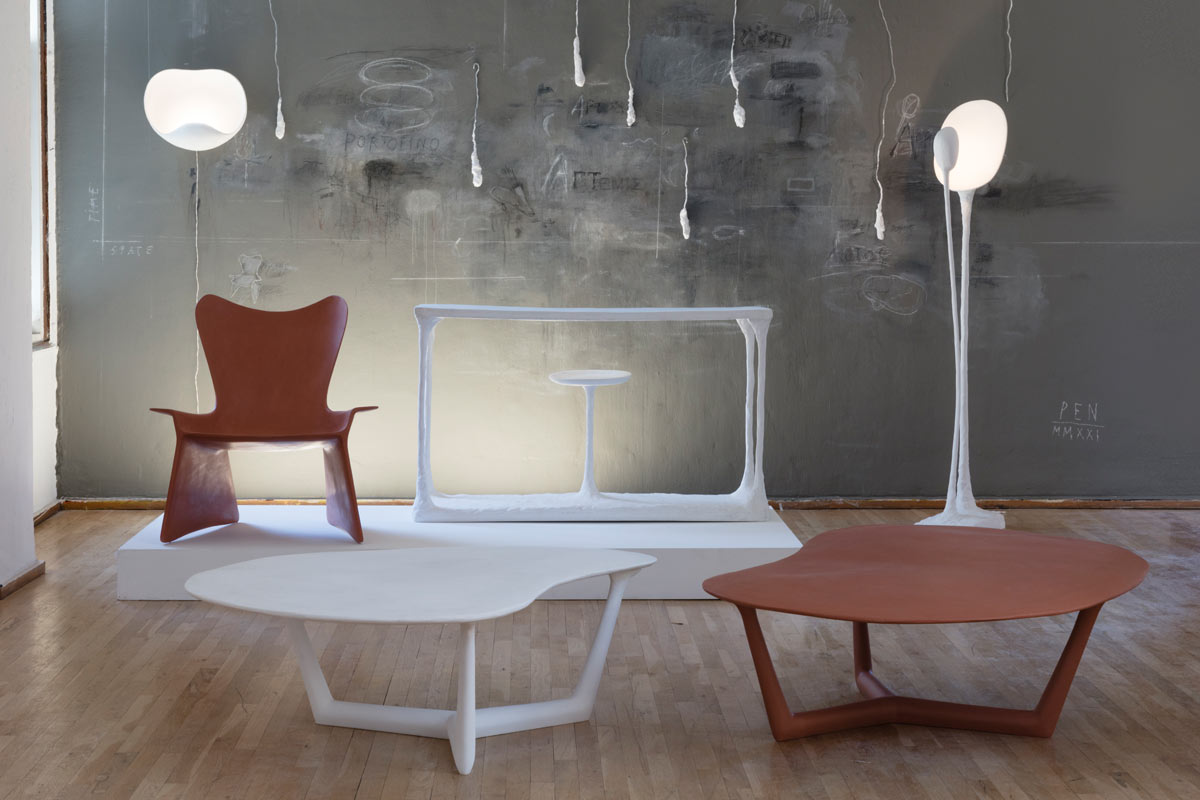 “This ‘Recollection’ show is a new endeavor, the experience of a sculptor, rather than creating something on a plan or having it executed by someone else. Coming up with a shape, making it with your hands and having it possibly change along the way because it is very physical. I think all of the pieces in this show are sculptures that complement the home environment.”
-Patrick Naggar on new work entirely conceived and fabricated in Plasterglass at the RALPH PUCCI (factory)

Patrick Naggar was the first designer to collaborate in the RALPH PUCCI Plasterglass material in 2017 and he returns with seven designs for this “Recollection” show, debuting in New York in April and arriving in the Los Angeles and Miami galleries this spring. “My first outdoor pieces were much more obvious—a chair, a table—smooth and clean,” the French designer explains. “These new pieces I think are more subtle, beautiful complementary pieces that capture the handwork involved to make them, great to be mixed with furniture that might be more conventional perhaps.”

Due to travel restrictions over the past year, Naggar was forced to remain in New York, where he typically spends part of the year. It became an opportunity to work in the new RALPH PUCCI (sculpture studio) and (factory) over several months to create these new designs whose name play homage to the mythology that remains a primary inspiration to him. The influence of Twentieth century sculptors like Giacometti, Brancusi and Twombly is also clear.

“I am not driven by mere form and style, I try to connect my deep interest in ancient cultures and science to my work,” says Naggar. “They might seem disparate, but I try to bring those realms into the pieces I design, in addition to being practical and useful.”

“Recollection” includes: the Demeter dining and side tables and Artemis console, whose bases reference vegetation, branches, mounds of earth from which the sprouts stem; this family is completed by the Aphrodite floor lamp that plays homage to ancient reflectors with its indirect light cast off a sort of shell. These designs are showcased in a white that evokes the plaster as well as a new Red Clay color. Three more curvilinear pieces of a different typology include the Hestia wall sconce, Lotus coffee table, and Portofino lounge chair, a perfectly sized petite modern play on a wing chair, a beautiful mate to Amalfi, his best-selling first Plasterglass design from 2017.