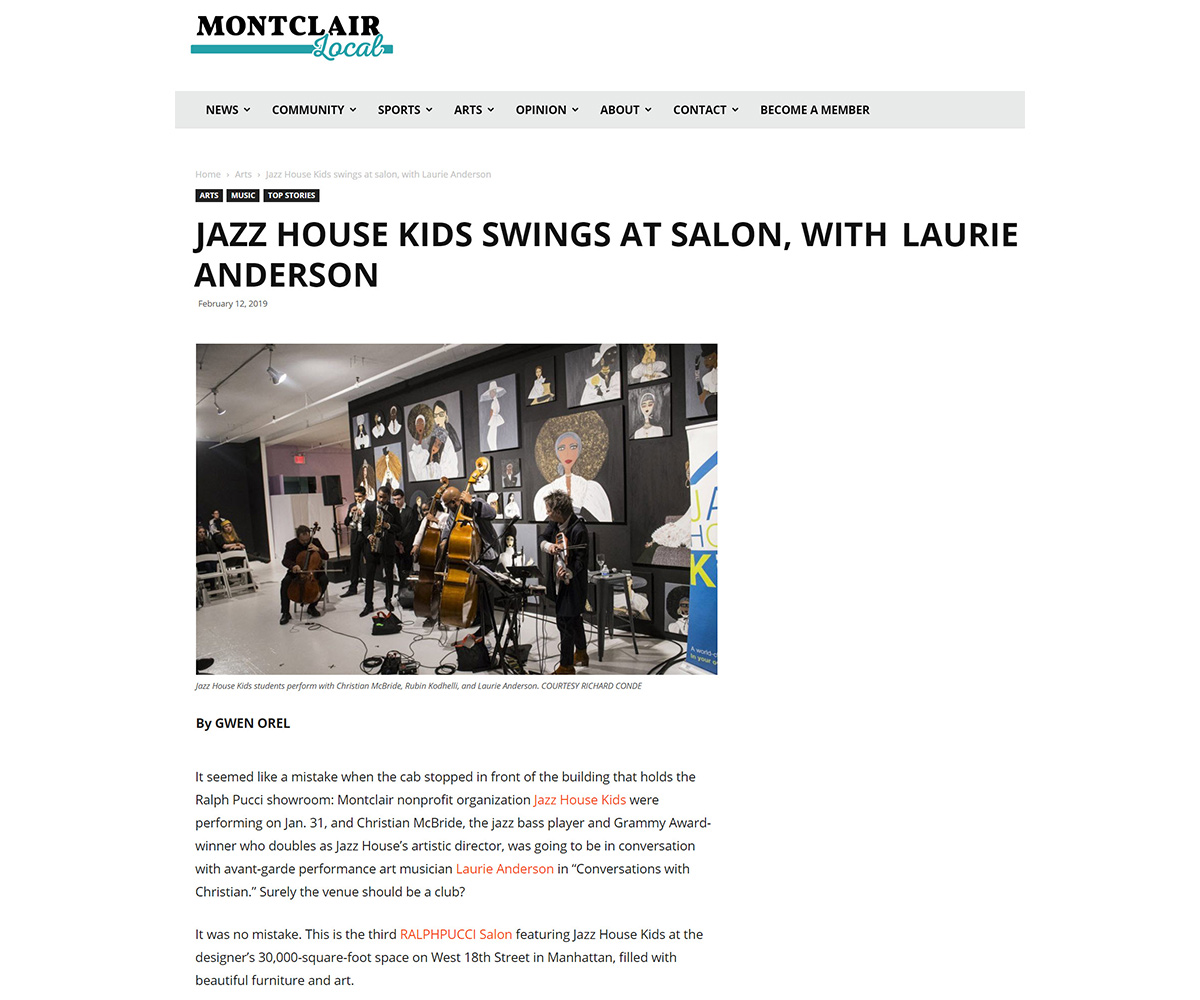 It seemed like a mistake when the cab stopped in front of the building that holds the Ralph Pucci showroom: Montclair nonprofit organization Jazz House Kids were performing on Jan. 31, and Christian McBride, the jazz bass player and Grammy Award-winner who doubles as Jazz House’s artistic director, was going to be in conversation with avant-garde performance art musician Laurie Anderson in “Conversations with Christian.” Surely the venue should be a club? It was no mistake. This is the third RALPHPUCCI Salon featuring Jazz House Kids at the designer’s 30,000-square-foot space on West 18th Street in Manhattan, filled with beautiful furniture and art.

McBride said that when Jazz House Kids president and founder Melissa Walker, who is also McBride’s wife, befriended Pucci, they’d asked about a possible donation. Instead, Pucci offered Jazz House Kids the space once a year. Pucci was a musician himself and a fan of jazz, said Walker, and played the drums.

“When you call Ralph Pucci, you will hear jazz playing, always,” she said. Pucci had seen Jazz House Kids at a donor party, with Pat Metheny as a guest. “He got to experience the mission,” she said. That mission includes bringing jazz into the schools and building a “jazz house,” a place for young musicians to learn and grow, work with established artists.

Every summer Jazz House Kids, now 17 years old, holds a summer workshop, and presents the Montclair Jazz Festival. This year, the RALPHPUCCI Salon raised money for CHICA Power, an education and performance program for young women. The first year of the salon, Jazz House Kids brought jazz guitarist and singer John Pizzarelli. Last year, they brought bass player Esperanza Spalding. And this year, they invited Laurie Anderson. Among other things, Anderson is known for her experimental and innovative instruments, including the tape-bow violin, which uses magnetic tape instead of horsehair on the bow; her use of voice filters, and her 1986 concert film “Home of the Brave.”

McBride said they’d get Anderson out to Montclair at some point. Anderson said she loved playing with the Jazz House Kids who joined her onstage. “It was so much fun playing with them,” she said. “What Melissa’s done is just colossal. I was proud to be asked to be in this.”

Speaking Jazz
McBride and Anderson were joined onstage by Albanian cellist Rubin Kodhelli at “Conversations With Christian” last Thursday, Jan. 31, in front of about 150 patrons, donors, guests and parents. The conversation was taped for McBride’s radio show “The Lowdown: Conversations with Christian,” which airs on SiriusXM.

During the conversation, McBride talked to Anderson about a concert she’d done in Australia for dogs (with their owners): “Dogs are such wonderful music fans,” Anderson said. He also interviewed her about her childhood, her work as a resident artist at NASA, and her evolution as a musician. One of eight children, she was never asked what she wanted to be, she said. Now she calls herself a “meaningless term, a multimedia artist,” she said, which allows her to paint, play music, and do other things — her undergraduate degree from Columbia is in sculpture — while at the moment, she’s particularly interested in virtual reality. Anderson talked about moving to New York from Chicago, and being inspired by her late husband, Lou Reed.

At times, McBride, Anderson and Kodhelli played together, Anderson playing on an electric violin that she created. “It took my breath away,” said Ruthie Peretti, of Ruthie’s Bar-B-Que & Pizza in Montclair. “It was alive. It was like watching something that was living being born.” Ruthie’s hosts a lot of jams, she said, but “This was like they were almost creating another language.” One of the things she liked the best was a sequence McBride did with Anderson, Kodhelli, and a few senior Jazz House Kids players who joined them onstage, where the musicians created an impromptu tune around an image. “I take improvisation at Montclair Film,” she said. “It reminded me of that, the way we play games, the collaborative work.”

Eighteen-year-old Jalin Shiver, a senior in Arts High School in Newark, played the fundraiser for the first time. “I didn’t really know what to expect,” he said. “One thing I really liked was when he was talking about how she worked with NASA.” The improv around imagery didn’t faze him: he’s done it before. “It’s more about listening and reacting, and that’s what I liked about it.” He has been playing with Jazz House Kids since sixth grade, crediting the group with leading him to pursue musical studies in college and in his career.

Walker gave Shiver a hug after she heard that he has a scholarship to the Berklee College of Music.“He has focused more and more of his time to honing that craft,” Walker said. “You can see that he’s going to have a great future. He’s a really good example of being in a community like Newark, putting in a program where there wasn’t a program, and now he’s going to leave us and keep coming back.”