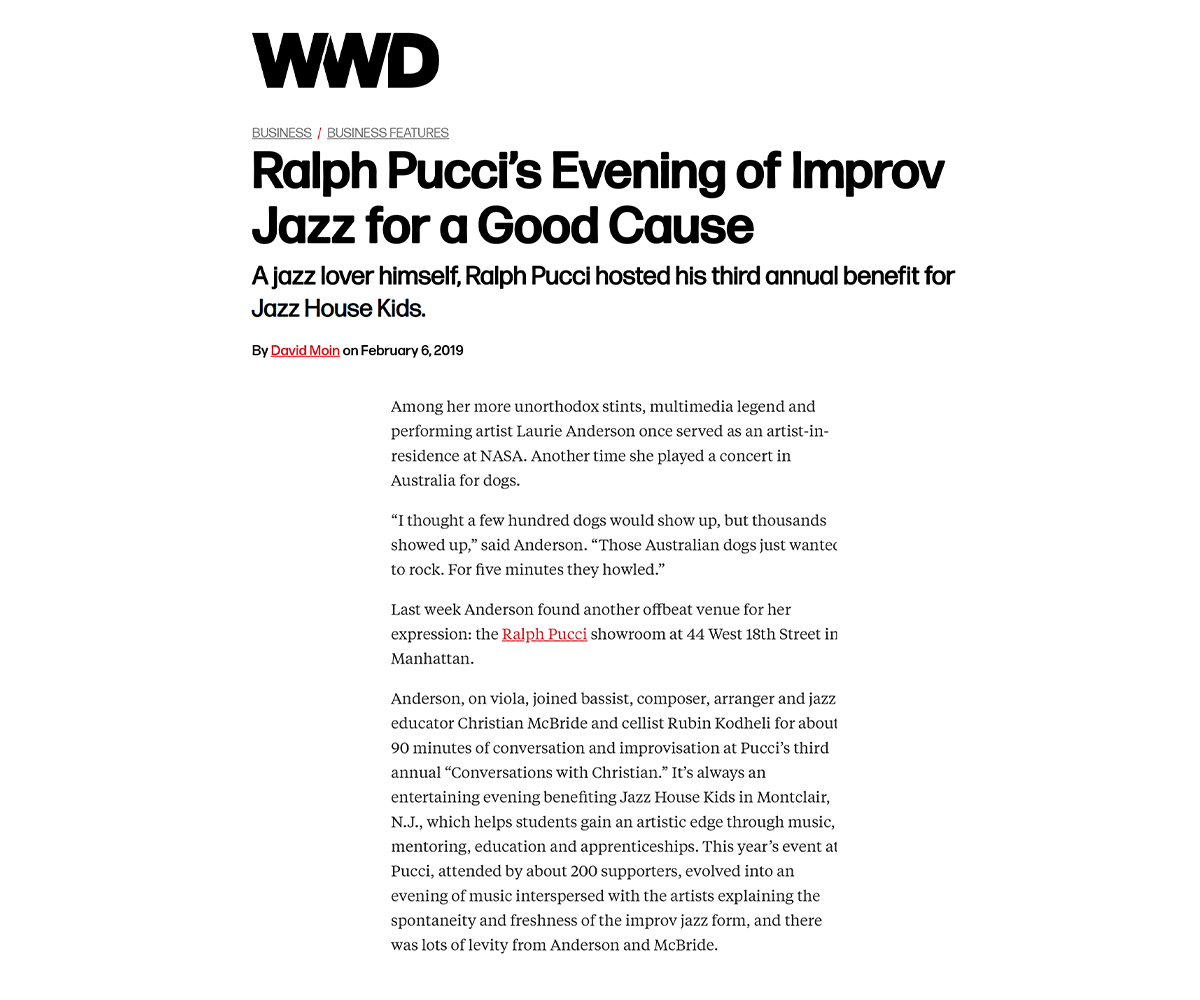 Ralph Pucci’s Evening of Improv Jazz for a Good Cause

Among her more unorthodox stints, multimedia legend and performing artist Laurie Anderson once served as an artist-inresidence at NASA. Another time she played a concert in Australia for dogs.

“I thought a few hundred dogs would show up, but thousands showed up,” said Anderson. “Those Australian dogs just wanted to rock. For five minutes they howled.”

Last week Anderson found another offbeat venue for her expression: the Ralph Pucci showroom at 44 West 18th Street in Manhattan.

Anderson, on viola, joined bassist, composer, arranger and jazz educator Christian McBride and cellist Rubin Kodheli for about 90 minutes of conversation and improvisation at Pucci’s third annual “Conversations with Christian.” It’s always an entertaining evening benefiting Jazz House Kids in Montclair, N.J., which helps students gain an artistic edge through music, mentoring, education and apprenticeships. This year’s event at Pucci, attended by about 200 supporters, evolved into an evening of music interspersed with the artists explaining the spontaneity and freshness of the improv jazz form, and there was lots of levity from Anderson and McBride.

McBride cued up the artists through a musical game he called “play the image,” asking Anderson and Kodheli to think of such scenes as Elon Musk renting a car at Avis, and James Brown taking a yoga class, to inspire some improv.

“True improvisation,” said McBride, is about “finding a groove” and allowing accompanying musicians to follow it.

“My mother always said don’t ever play the same piece the same way,” said Kodheli. For him, improvisation is all about “believing in your ears and connecting to your own emotions.”

The crowd also watched a performance by Jazz House Kids alumni and a preview of “Chica Power,” an initiative at the school encouraging young women to explore jazz. “When you listen to them, you forget that you are listening to a bunch of teenagers. Just think back at what you were doing when you were a teenager,” said Melissa Walker, founder of the 15-year-old Jazz House Kids. She’s married to McBride.

The artists played against a backdrop of Rebecca Moses paintings themed “White Shirts,” representing women in a range of ages, sizes, shapes and ethnicities, all wearing white shirts.

Ralph Pucci, whose Jazz Nights have raised over $200,000 for Jazz House Kids, spoke of what unites all the artists participating that evening — the ability to be different, provide the unexpected, and not be put in a box. Pucci’s own creative journey started with mannequins and evolved to a showroom encompassing also home furnishings, fashion, art and photography in a single setting for an elevated experience.