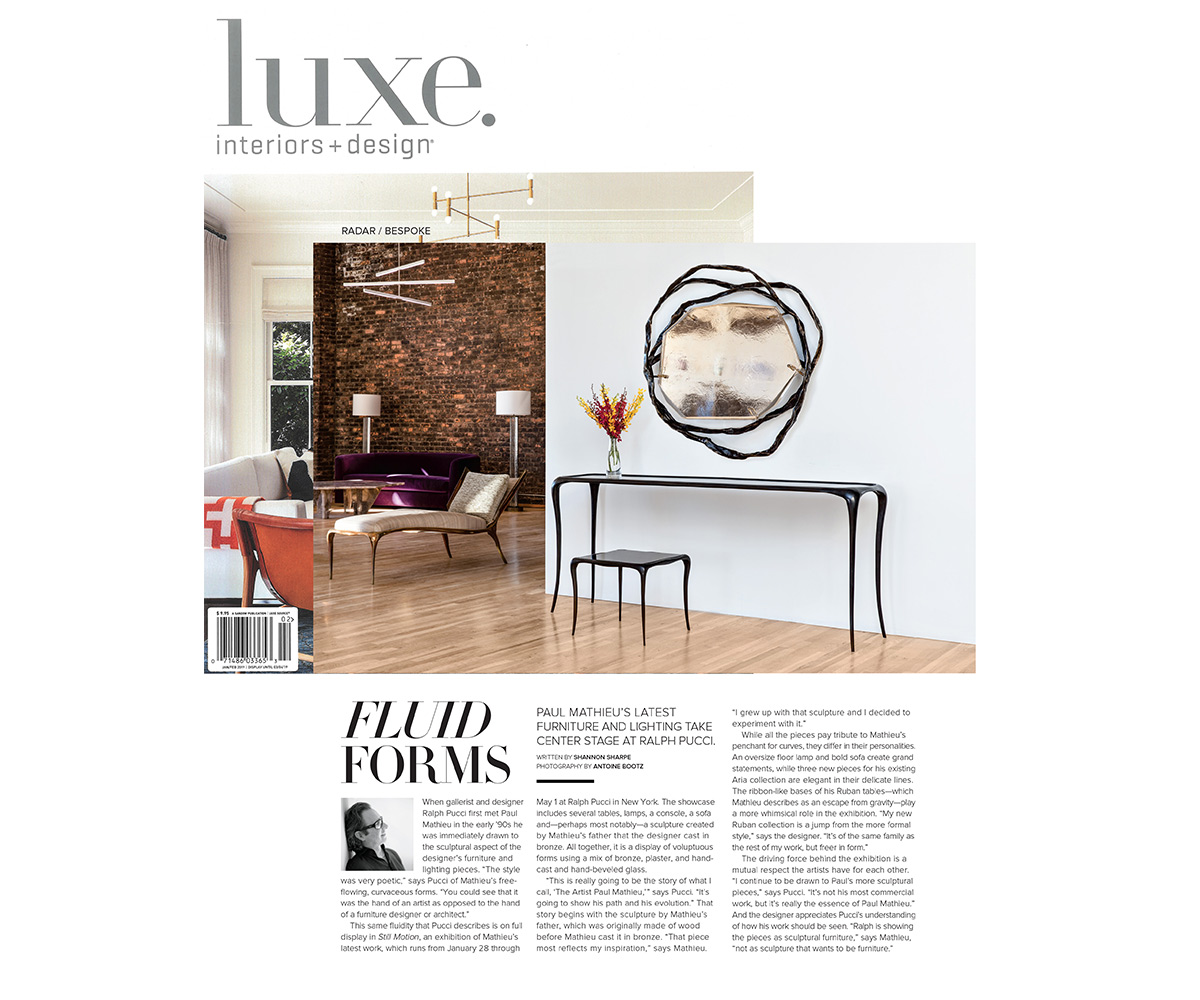 When gallerist and designer Ralph Pucci first met Paul Mathieu in the early ‘90s he was immediately drawn to the sculptural aspect of the designer’s furniture and lighting pieces. “The style was very poetic,” says Pucci of Mathieu’s free-flowing, curvaceous forms. “You could see that it was the hand of an artist as opposed to the hand of a furniture designer or architect.”

This same fluidity that Pucci describes is on full display in Still Motion, an exhibition of Mathieu’s latest work, which runs from January 28 through May 1 at RALPH PUCCI in New York. The showcase includes several lamps, tables, a console, a sofa and – perhaps most notably – a sculpture created by Mathieu’s father that the designer cast in bronze. All together, it is a display of voluptuous forms using a mix of bronze, plaster, and hand-cast and hand-beveled glass.

“This is really going to be the story of what I call, ‘The Artist Paul Mathieu,’” says Pucci. “It’s going to show his path and his evolution.” That story begins with the sculpture by Mathieu’s father, which was originally made of wood before Mathieu cast it in bronze. “That piece most reflects my inspiration,” says Mathieu. “I grew up with that sculpture and I decided to experiment with it.”

While all the pieces pay tribute to Mathieu’s penchant for curves, they differ in their personalities. An oversize floor lamp and bold sofa create grand statements, while three new pieces for his existing Aria collection are elegant in their delicate lines. The ribbon-like bases of his Ruban tables – which Mathieu describes as an escape from gravity – play a more whimsical role in the exhibition. “My new Ruban collection is a jump from the more formal style,” says the designer. “It’s of the same family as the rest of my work, but freer in form.”

The driving force behind the exhibition is a mutual respect the artists have for each other. “I continue to be drawn to Paul’s more sculptural pieces,” says Pucci. “It’s not his most commercial work, but it’s really the essence of Paul Mathieu.” And the designer appreciates Pucci’s understanding of how his work should be seen. “Ralph is showing the pieces as sculpture furniture,” says Mathieu, “not as sculpture that wants to be furniture.”