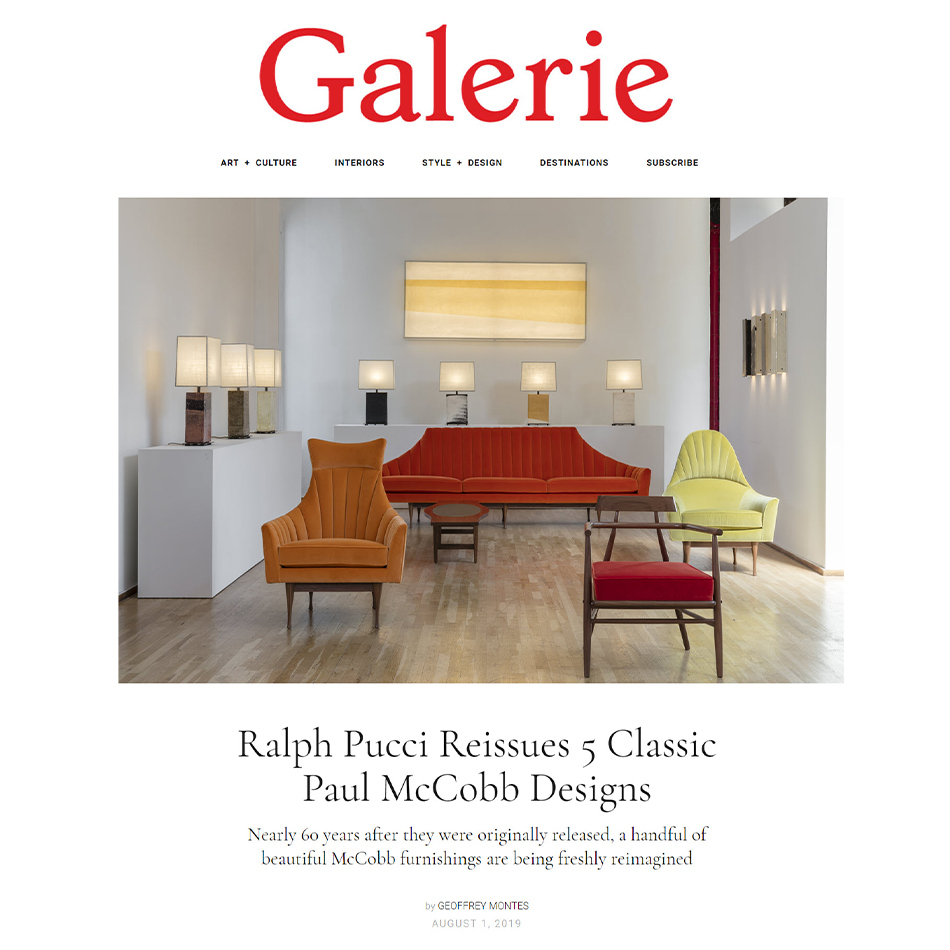 Nearly 60 years after they were originally released, a handful of beautiful McCobb furnishings are being freshly reimagined

Nearly 60 years after they were originally released, a handful of classic Paul McCobb designs are being reimagined courtesy of legendary New York gallerist and designer Ralph Pucci. It all started with Pucci’s long and fruitful relationship with Jens Risom, the Danish-born furniture designer credited with bringing the Scandinavian aesthetic stateside in the 1940s and ‘50s. After Risom’s death in 2016 at the age of 100, licensing firm Form Portfolios purchased the rights to his oeuvre. Fortuitously, the company also oversees the McCobb catalogue, and it was co-founder Mark Masiello who first pitched reissuing some of his most beautiful designs to Pucci.

Initially skeptical, Pucci warmed to the idea when shown some of the sculptural pieces. “I was immediately taken with the sofa,” Pucci tells Galerie, referencing McCobbs’s Symmetrcial sofa with its voluptuous proportions, ribbed upholstery, and tapered legs. “So I said, why don’t we give it a shot?”

Two upholstered chairs followed, one wingback and the other shaped like a parabola. “Everything I’m attracted to is sculptural,” says Pucci, who is an avid art lover and often hosts art exhibitions at his New York showroom. Rounding out the collection are a Japanese-inspired wooden chair with a thick red seat cushion and a curvaceous cocktail table crafted in walnut and black leather.

While each of the editions feature McCobb’s original dimensions, slight tweaks have been made, like swapping McCobb’s linen upholstery for plush velvet. “I didn’t want to do another rehashing,” he says. “I wanted the pieces to have a Pucci spirit but McCobb soul.”

For the display, Pucci purposely steered away from a typical white box gallery aesthetic, instead devising an inviting residential atmosphere. To do this, he utilized artful ceramic lamps designed by Jonathan Wigmore. “I wanted someone modern and young to complement McCobb and make him more contemporary. The key is to bring a new, younger audience to McCobb. That’s actually my goal.”

The exhibition is on display at Pucci’s Manhattan gallery through mid-October and will travel to his Los Angeles outpost. 44 West 18th St, New York.