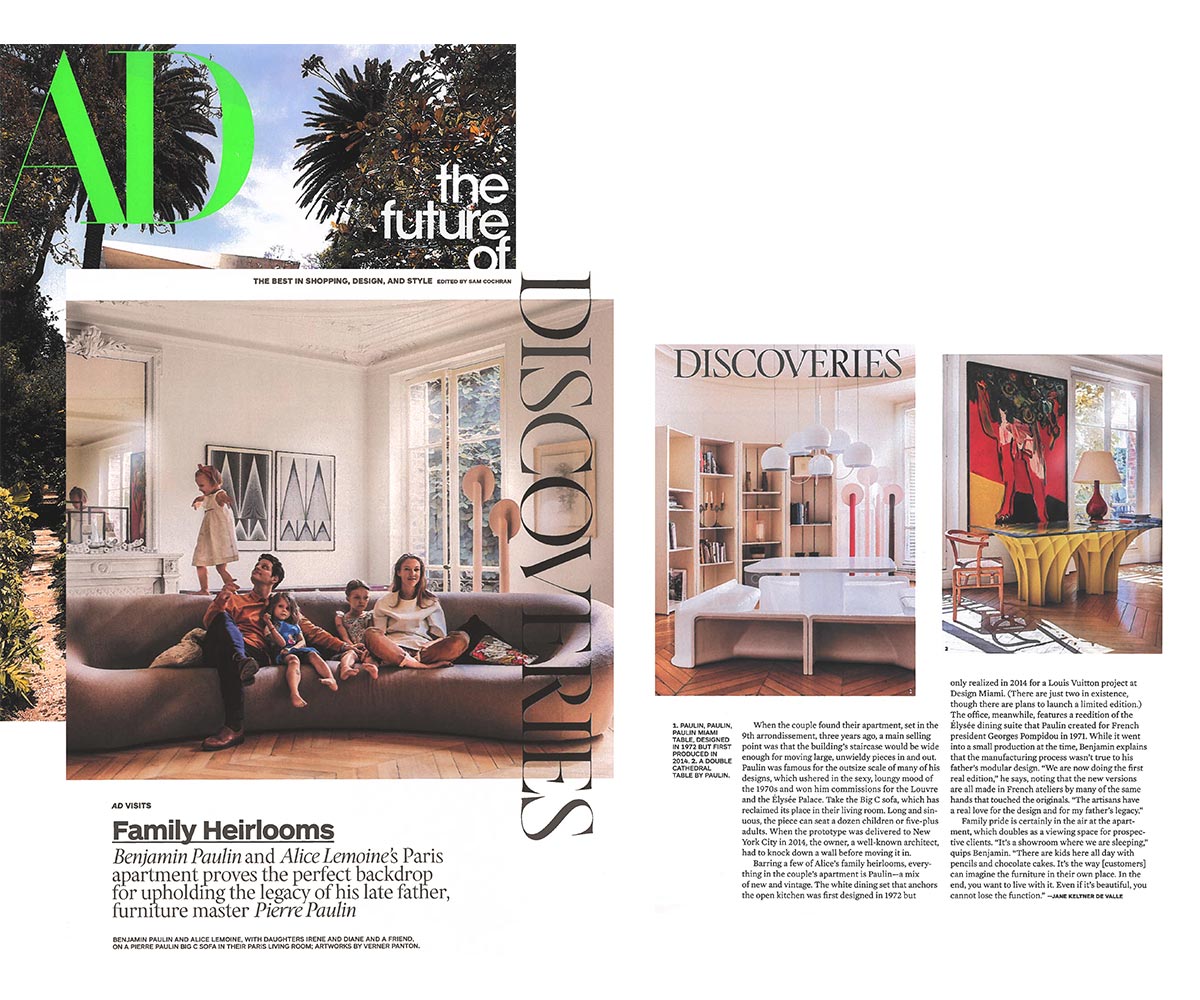 On a recent afternoon, the Paris apartment of Benjamin Paulin and Alice Lemoine is stark naked save for a single bookcase and a few pieces of art—not exactly what you’d expect chez the son of the late, great French designer Pierre Paulin (1927–2009). “Sometimes we have nothing and sometimes we have four sofas,” notes Benjamin, explaining that their missing furniture, all by his father, is on loan for exhibitions in London and Frankfurt. If that sounds like musical chairs, they like it this way. “When it’s empty,” Benjamin says, “the girls run and dance. When it’s full, they jump from piece to piece. It’s a fun game both ways.” Adds Alice, “We don’t want to be fixed in something that doesn’t move. In French we call it getting too bourgeois.”

It’s no accident that Paulin designs are at the forefront of chic once again. In 2013 the family officially launched Paulin, Paulin, Paulin, dedicated to steering his father’s legacy into a new era. In the time since, they have faithfully realized his designs, many never produced in his lifetime. (New editions can now be found at Ralph Pucci in the States.) It hasn’t hurt that Benjamin and Alice are young and hip—he a part-time musician with several rap albums under his belt, she a former fashion designer—with a social circle that includes Joseph Dirand and Virgil Abloh.

When the couple found their apartment, set in the 9th arrondissement, three years ago, a main selling point was that the building’s staircase would be wide enough for moving large, unwieldy pieces in and out. Paulin was famous for the outsize scale of many of his designs, which ushered in the sexy, loungy mood of the 1970s and won him commissions for the Louvre and the Élysée Palace. Take the Big C sofa, which has reclaimed its place in their living room. Long and sinuous, the piece can seat a dozen children or five-plus adults. When the prototype was delivered to New York City in 2014, the owner, a well-known architect, had to knock down a wall before moving it in.

Barring a few of Alice’s family heirlooms, everything in the couple’s apartment is Paulin—a mix of new and vintage. The white dining set that anchors the open kitchen was first designed in 1972 but only realized in 2014 for a Louis Vuitton project at Design Miami. (There are just two in existence, though there are plans to launch a limited edition.) The office, meanwhile, features a reedition of the Élysée dining suite that Paulin created for French president Georges Pompidou in 1971. While it went into a small production at the time, Benjamin explains that the manufacturing process wasn’t true to his father’s modular design. “We are now doing the first real edition,” he says, noting that the new versions are all made in French ateliers by many of the same hands that touched the originals. “The artisans have a real love for the design and for my father’s legacy.”

Family pride is certainly in the air at the apartment, which doubles as a viewing space for prospective clients. “It’s a showroom where we are sleeping,” quips Benjamin. “There are kids here all day with pencils and chocolate cakes. It’s the way [customers] can imagine the furniture in their own place. In the end, you want to live with it. Even if it’s beautiful, you cannot lose the function.”