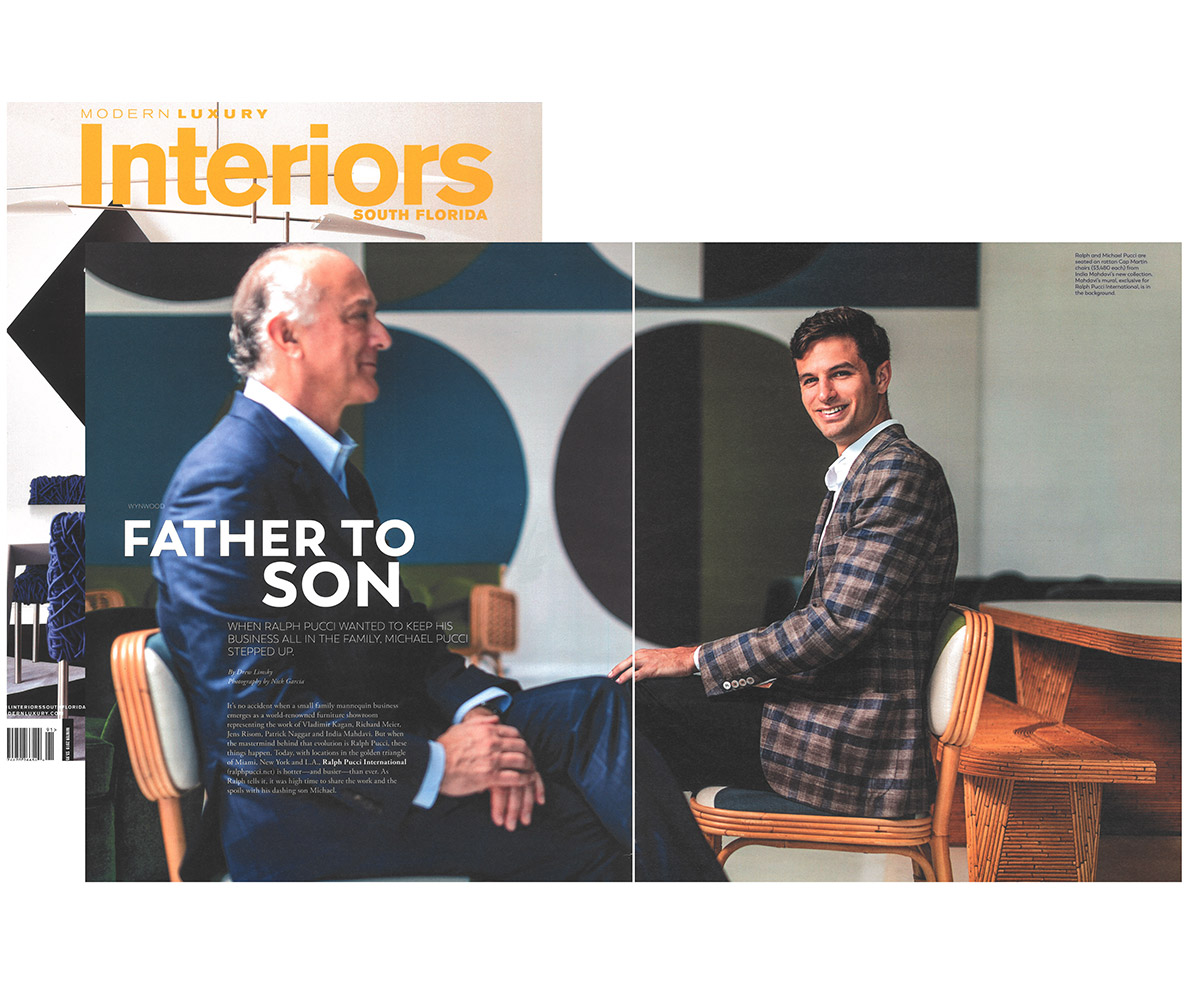 When Ralph Pucci wanted to keep his business all in the family, Michael Pucci stepped up.

It’s no accident when a small family mannequin business emerges as a world-renowned furniture showroom representing the work of Vladimir Kagan, Richard Meier, Jens Risom, Patrick Naggar and India Mahdavi. But when the mastermind behind that evolution is Ralph Pucci, these things happen. Today, with locations in the golden triangle of Miami, New York and L.A., Ralph Pucci International is hotter—and busier—than ever. As Ralph tells it, it was high time to share the work and the spoils with his dashing son Michael.

Ralph, how do you think you influenced Michael’s aesthetic sense as he was growing up?

Ralph Pucci: I would look back even further. I went into a family business, and never in a million years did my father think I would want to go into a mannequin repair company. He was shocked that I joined the business. I wouldn’t say that I was shocked that Michael came into the business, but I’d always thought he’d go into the world of finance. He had interned in a few financial firms during summers in college, but when the real bell went off to start work, he said, ‘I want to go in with you.’

Michael, do you have siblings?

Michael Pucci: I have a brother and a sister. My sister is in education, and my brother works in TV.

So you were the chosen one.

MP: [Laughs] I was the chosen one. It’s great to join a family business and help it grow in a changing industry.
RP: The whole world is changing, and you need young ideas. I’m from the school of Henry Moore and Giacometti, everything made by hand in the old-fashioned way, and Michael has that appreciation. As soon as he came into the business, every weekend he was going to every gallery, every museum show in the city. He knows all the newest names that I don’t even know. But he also has knowledge of the new technology out there. Companies have to have a little gray hair, but they also have to have youth.

How do the two of you divide your time between the different locations?

RP: We spend most of our time in New York. We come to Miami four times a year, and Los Angeles four times a year. Michael is now a major player in Ralph Pucci, so if I can’t come to an opening, if Michael is there, it’s essentially the same thing.
MP: I think the first time that happened was at Art Basel in 2017, when we had the exhibition of Patrick Naggar and Jeff Quinn. That was the first time I hosted a Ralph Pucci show solo.

Do you ever feel you had to prove yourself as the point of contact for the artists?

MP: I’m still quite young, so it did take time for the artists to feel comfortable coming to me. It started changing with India Mahdavi three years ago. This is our fourth collection with her. We were at the Milan show, and I went to India’s opening at Valentino. We were talking about creating a real wow for the Miami market. We showed her the outside of the building and we discussed Wynwood’s murals, and within five minutes she said, ‘I want to paint the whole exterior.’ The walls refer to Wynwood, but in her voice. People have stopped by to ask about the murals, never having known Ralph Pucci before, and that’s exactly what we wanted. So I deal with a lot of the younger artists. But there are the people Ralph has worked with forever, like Patrick Naggar.

RP: I’ve known Patrick for 30 years. I think he’s one of the greatest living designers. He’s on the quiet side, an intellectual, and he’s truly a tremendous talent—he not only knows architecture, but he knows photography, he knows sculpture. And when Michael joined the company, one of the first things I did was say, ‘Let’s have lunch with Patrick.’ It was so important for Michael to meet and learn from a man of such talent. And when the lunch was over, Patrick said to me, ‘Michael is going to be very good for you.’
MP: Being introduced to someone like that was an honor. After that, he was the first artist to take me under his wing.

What’s the most interesting thing you’ve learned through working with your father?

MP: That nothing comes easily, and that you have to keep promoting the artists and designers no matter how big they are. Educating the clients is a lot more difficult than saying, ‘You should own a Richard Meier.’ Nothing comes easily