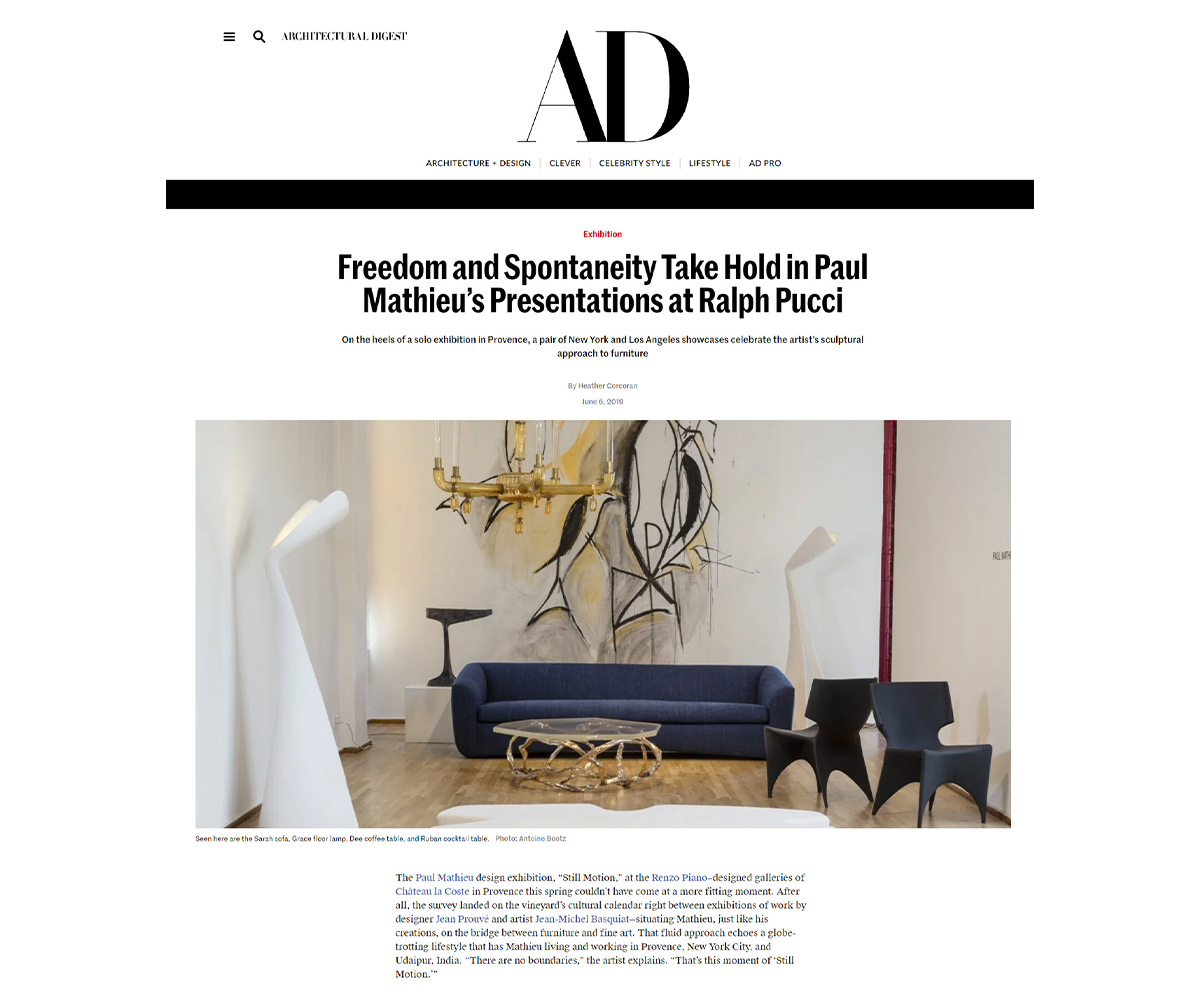 The Paul Mathieu design exhibition, “Still Motion,” at the Renzo Piano–designed galleries of Château la Coste in Provence this spring couldn’t have come at a more fitting moment. After all, the survey landed on the vineyard’s cultural calendar right between exhibitions of work by designer Jean Prouvé and artist Jean-Michel Basquiat—situating Mathieu, just like his creations, on the bridge between furniture and fine art. That fluid approach echoes a globe-trotting lifestyle that has Mathieu living and working in Provence, New York City, and Udaipur, India. “There are no boundaries,” the artist explains. “That’s this moment of ‘Still Motion.’”

Now, on the heels of the Château la Coste exhibition, which featured a range of lyrical, sculptural work from French-born designer, “Still Motion” continues in the U.S., with presentations at Ralph Pucci International in New York on view through July 1, and a West Coast exhibition opening at the brand’s Los Angeles showroom this October.

Together, the exhibitions present a wide-ranging view of the artist-designer’s deft hand with materials. There’s age-old bronze, carefully patinaed in the totemic Aria floor lamp and pushed to its limit to form nest-like ribbons as the bases of the Ruban cocktail table. And there are modern materials such as Ralph Pucci’s proprietary plasterglass, which forms the towering Grace lamp and the Dee Coffee Table, a piece inspired by jazz legend Dee Dee Bridgewater that took home the prize for best outdoor furniture at this May’s edition of NYCxDesign.

Mathieu’s distinct ability to imbue emotion through touch and textures is perhaps nowhere more apparent than in the Nage console, which will make its U.S. debut at the Los Angeles exhibition at Ralph Pucci.

Topped with a slab of hand-beveled glass imprinted with the hills and valleys of a crocodile hide, it looks almost as if an invisible reptile is about to break the watery surface of the piece. “I wanted to revive it,” Mathieu says of the crocodile skin that inspired the design. In order to give the hide a new life, Mathieu collaborated with a team of glass experts in Chicago—the type of designer-maker partnership that powers so much of his work. “I never think of how [a piece] is going to fit a trend; it really comes from the heart, the moment,” Mathieu explains. “I’m attracted to working with partners, like master crafts[people].” After all, it’s in that designer-maker dialogue where the magic really happens.

It’s a fitting way to work, considering that Mathieu trained as a fine artist and sculptor rather than in industrial design. That’s why, he says, he approaches design by developing a concept and working in tandem with the craftspeople who can realize his vision—always learning along the way. “I approach design very instinctively,” Mathieu says of his method, a process of hard work that’s all but invisible in the polished sheen of the finished pieces. “Projects become a success if we forget the work, the technology, that was put in—we have to get to the magic.”

That quest for emotional connection is at the heart of the work; regardless of his audience—design professionals, collectors, craftspeople, the general public—Mathieu has a message he wants to make clear: “I’d like them to understand the freedom, the pleasure, the spontaneity. To understand and feel the quality of the people who worked on it—the craftsmanship.”