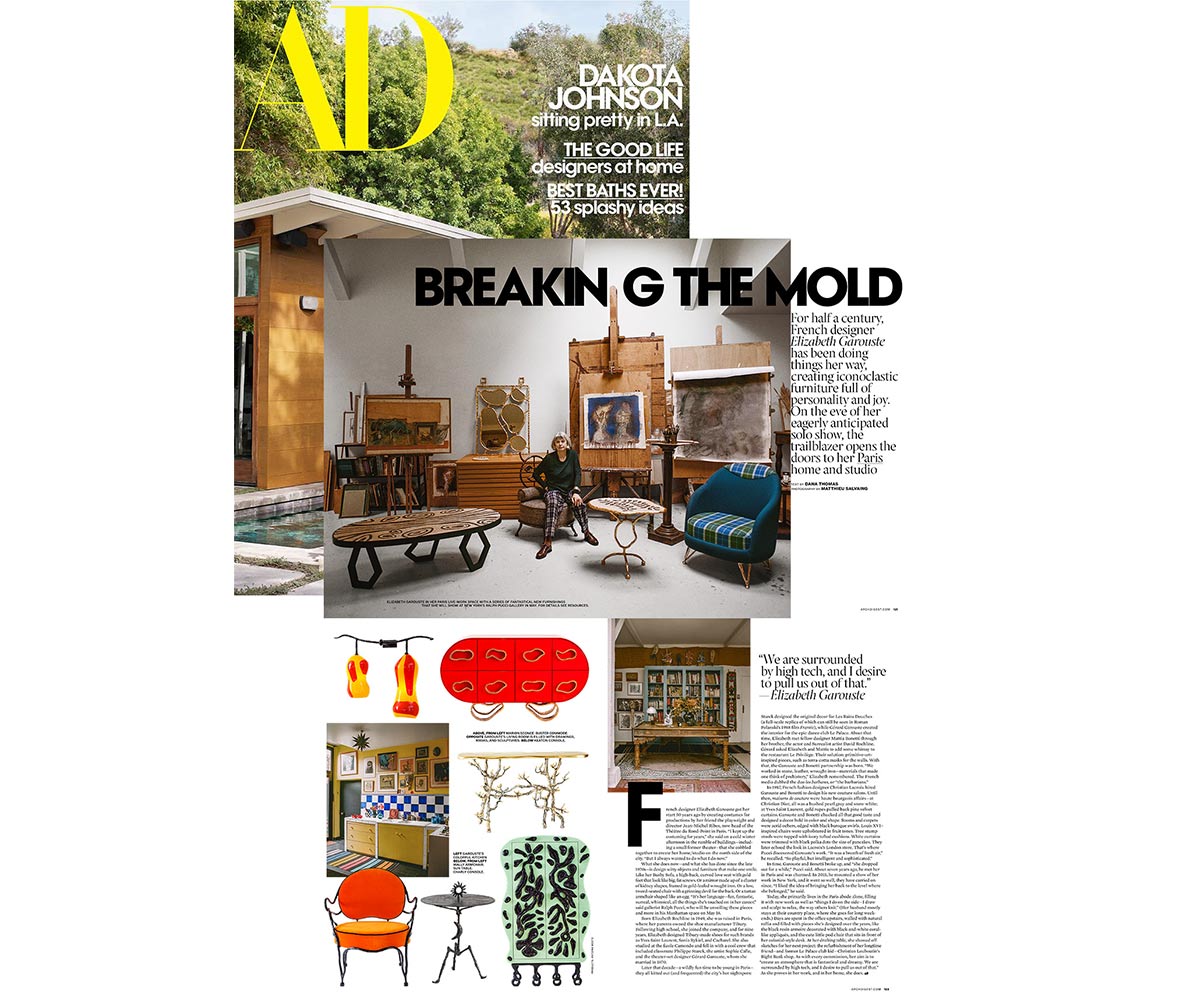 French designer Elizabeth Garouste got her start 50 years ago by creating costumes for productions by her friend the playwright and director Jean-Michel Ribes, now head of the Théâtre du Rond-Point in Paris. “I kept up the costuming for years,” she said on a cold winter afternoon in the ramble of buildings—including a small former theater—that she cobbled together to create her home/studio on the north side of the city. “But I always wanted to do what I do now.”

What she does now—and what she has done since the late 1970s—is design witty objects and furniture that make one smile. Like her Busby Sofa, a high-back, curved love seat with gold feet that look like big, fat screws. Or a mirror made up of a cluster of kidney shapes, framed in gold-leafed wrought iron. Or a low, tweed-seated chair with a grinning devil for the back. Or a tartan armchair shaped like an egg. “It’s her language—fun, fantastic, surreal, whimsical, all the things she’s touched on in her career,” said gallerist Ralph Pucci, who will be unveiling these pieces and more in his Manhattan space on May 18.

Born Elizabeth Rochline in 1949, she was raised in Paris, where her parents owned the shoe manufacturer Tibury. Following high school, she joined the company, and for nine years, Elizabeth designed Tibury-made shoes for such brands as Yves Saint Laurent, Sonia Rykiel, and Cacharel. She also studied at the École Camondo and fell in with a cool crew that included classmate Philippe Starck, the artist Sophie Calle, and the theater-set designer Gérard Garouste, whom she married in 1970.

Later that decade—a wildly fun time to be young in Paris—they all kitted out (and frequented) the city’s hot nightspots: Starck designed the original decor for Les Bains Douches (a full-scale replica of which can still be seen in Roman Polanski’s 1988 film Frantic), while Gérard Garouste created the interior for the epic dance club Le Palace. About that time, Elizabeth met fellow designer Mattia Bonetti through her brother, the actor and Surrealist artist David Rochline. Gérard asked Elizabeth and Mattia to add some whimsy to the restaurant Le Privilège. Their solution: primitive-art-inspired pieces, such as terra-cotta masks for the walls. With that, the Garouste and Bonetti partnership was born. “We worked in stone, leather, wrought iron—materials that made one think of prehistory,” Elizabeth remembered. The French media dubbed the duo les barbares, or “the barbarians.”

In 1987, French fashion designer Christian Lacroix hired Garouste and Bonetti to design his new couture salons. Until then, maisons de couture were haute bourgeois affairs—at Christian Dior, all was a hushed pearl gray and snow white; at Yves Saint Laurent, gold ropes pulled back pine velvet curtains. Garouste and Bonetti chucked all that good taste and designed a decor bold in color and shape. Rooms and carpets were acrid ochers, edged with black baroque swirls. Louis XVI–inspired chairs were upholstered in fruit tones. Tree stump stools were topped with ivory tufted cushions. White curtains were trimmed with black polka dots the size of pancakes. They later echoed the look in Lacroix’s London store. That’s where Pucci discovered Garouste’s work. “It was a breath of fresh air,” he recalled. “So playful, but intelligent and sophisticated.”

In time, Garouste and Bonetti broke up, and “she dropped out for a while,” Pucci said. About seven years ago, he met her in Paris and was charmed. In 2015, he mounted a show of her work in New York, and it went so well, they have carried on since. “I liked the idea of bringing her back to the level where she belonged,” he said.

Today, she primarily lives in the Paris abode alone, filling it with new work as well as “things I do on the side—I draw and sculpt to relax, the way others knit.” (Her husband mostly stays at their country place, where she goes for long weekends.) Days are spent in the office upstairs, walled with natural raffia and filled with pieces she’s designed over the years, like the black resin armoire decorated with black-and-white coral-like appliqués, and the cute little pod chair that sits in front of her colonial-style desk. At her drafting table, she showed off sketches for her next project: the refurbishment of her longtime friend—and former Le Palace club kid—Christian Louboutin’s Right Bank shop. As with every commission, her aim is to “create an atmosphere that is fantastical and dreamy. We are surrounded by high tech, and I desire to pull us out of that.” As she proves in her work, and in her home, she does.