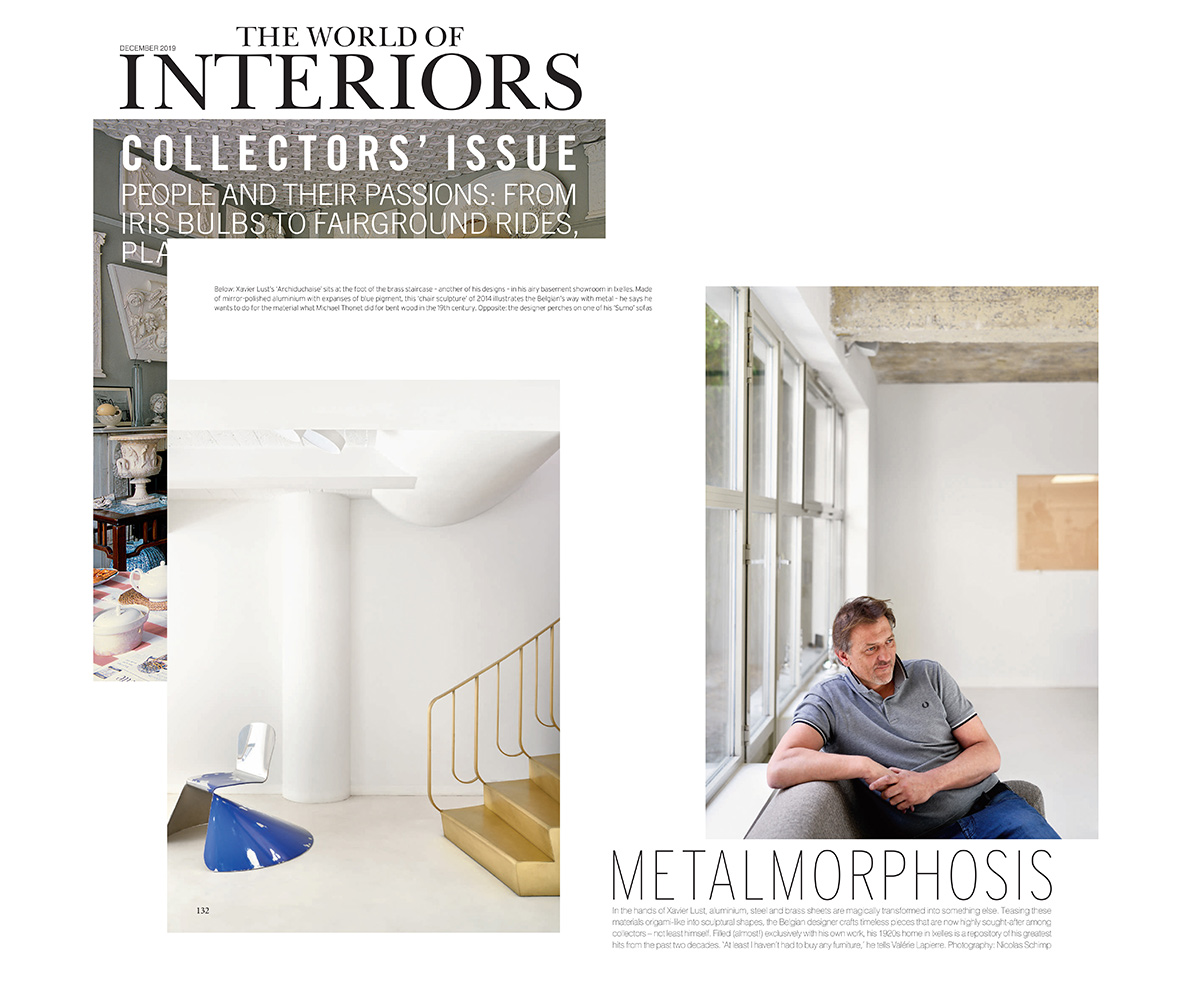 The World of Interiors

In the hands of Xavier Lust, aluminum, steel and brass sheets are magically transformed into something else. Teasing these materials origami-like into sculptural shades, the Belgian designer crafts timeless pieces that are now highly sought-after among collectors – not least himself. Filled (almost!) exclusively with his own work, his 1920s home in Ixelles is a repository of his greatest hits from the past two decades. ‘At least I haven’t had to buy any furniture,’ he tells Valérie Lapierre.

Three years ago, the Belgian designer Xavier Lust moved into a 1928 Modernist house in Ixelles, on the outskirts of Brussels, with his partner, gallery owner Emilie Dujat, and their two children. As an inscription on the façade tells us, this building was a printworks, with accommodation over three floors and a large basement, which once housed the workshop but is now converted into a showroom and office. At the back of the building, invisible from the street, the ground floor opens on to a 200 sq m terrace, where Lust has replaced the ‘horrible plastic lighting domes’, which had made the space unusable with slabs of glass that unify everything and help illuminate the basement. ‘This is just the house I was looking for, with work and exhibition spaces where I can take photos of my objects, as well as a dwelling,’ he says. ‘I tend to work non-stop and this means I can at least eat meals with the family.’

Now 50, Lust talks about his work with passion and at a furious pace. Having graduated in interior design in 1992, he made his name with minimalist furniture made from folded metal. ‘I try to lend warmth and softness to this material, which is considered cold and hard,’ he explains, adding that he aims to show ‘the same inventiveness as Thonet did working with wood’.

The house and showroom have separate street entrances, but on the inside the spaces adjoin and are often difficult to distinguish. We begin by passing through the door of the former printworks, on the left. It opens on a white floor where one of the designer’s ‘Le Banc’ benches in red lacquered aluminum takes pride of place. Here too is another of his designs, although some visitors assume that it must be original to the building: an elegant staircase like a burnished-brass jewel, which leas down to the 265 sq m show-room. Intensely white and bathed in light thanks to the overhead skylights, this is the perfect setting for his sculptural furniture. An ‘Archiduchaise’ with the blue-pigmented aluminum skirt that provides its support sits alongside the organic form of a ‘Floral’ stool sheathed in leather. Beyond them, on a rug in a gently strobing honeycomb design, is an ‘S-Table’, its sinuous pedestal reflected in a distorting memoir that only serves to exaggerate the slightly disorienting sense of movement. Most curious of all, perhaps, is a piece of furniture made from brass, a hybrid of console table and chair.

Until 1998, Lust refined his designs through technical experimentation. Recognition came in 2000, when he first showed his bold new take on a bench, ‘Le Banc,’ in Milan. ‘I had this intuition about 3D folding using traditional machinery, but employed in a different way,’ he says. ‘The shape came from the material, which I allowed to distort naturally through a set of constraints. This gives an organic and rounded form that both saves the material and strengthens it. And when something works technically, it is often beautiful.’

Now to be found in institutions such as the Pompidou Centre in Paris and Stedeliijk Museum in Amsterdam, ‘Le Banc’ attracted the attention of Italian brands MDF Italia, Driade and De Padova and he began to design lamps, chairs, tables and the like for them, picking up a few design prizes along the way. At the same time, he developed an interest in street furniture. In 2007, the ‘Gun Metal’ bench was born, its perforations a nifty solution to the problem of graffiti. It earned Lust more acclaim and he became a favourite of dealers such as Carpenters Workshop Gallery, Ralph Pucci, and Galerie du Passage, designing one-off and limited-edition pieces for them. Collectors queued up to get their hands on his work. All the while, he continued industrial production and his line of street furniture.

The designer’s vast office is at the back of the showroom, at the rear of a small glazed courtyard. His assistants sometimes take their lunch on the ‘PicNik’ table/seat, an exercise in the origami of sheet metal that is now considered to be something of a classic and can be seen everywhere from Tate Modern in London to The Standard Hotel in New York. From the courtyard, an iron staircase leads up to the terrace, an immense open-air lounge, where Lust like to host events showing off his outdoor furniture, such as the ‘Flow’ sofa or the wave-like ‘Volupte’ bench.

Inside the house, the rooms are of a classical scale and the different floors are reached by a small wooden staircase. The ground floor, which is the children’s domain, consists of three bedrooms and an office. The parents sleep on the second floor, in a suite comprising a bedroom, dressing room and bathroom, as well as a large terrace that doubles the space. The family gathers together on the first floor, around the big white ‘Blow Up’ table in the kitchen, or in an adjacent room that serves as dining and living room.

‘I joined these two spaces together to make this long rectangular room, whose proportions I adore, a bit like a room in a Venetian palazzo,’ the designer says. The walls are light and bare, and, apart from some children’s toys brightening up the parquet floor, all the objects are again by him. Instantly recognizable are his ‘S-Table’, his polished-stainless-steel ‘T-Chairs’, his ‘Fireworks’ chandelier with its opaline globes and his ‘Sumo’ armchairs, a generously shaped cross between a cube and a sphere.

‘At least I haven’t had to buy any furniture’, Lust jokes. ‘Besides, I like living among my objects, and this allows me to show them in situ, not just in a white cube like downstairs.’ Then, after we tease him that he has absolutely nothing by any other designer, he whips a utensil out of a kitchen drawer and brandishes it with a laugh. ‘That’s not true! I have an Ettore Sottsass pepper mill!’