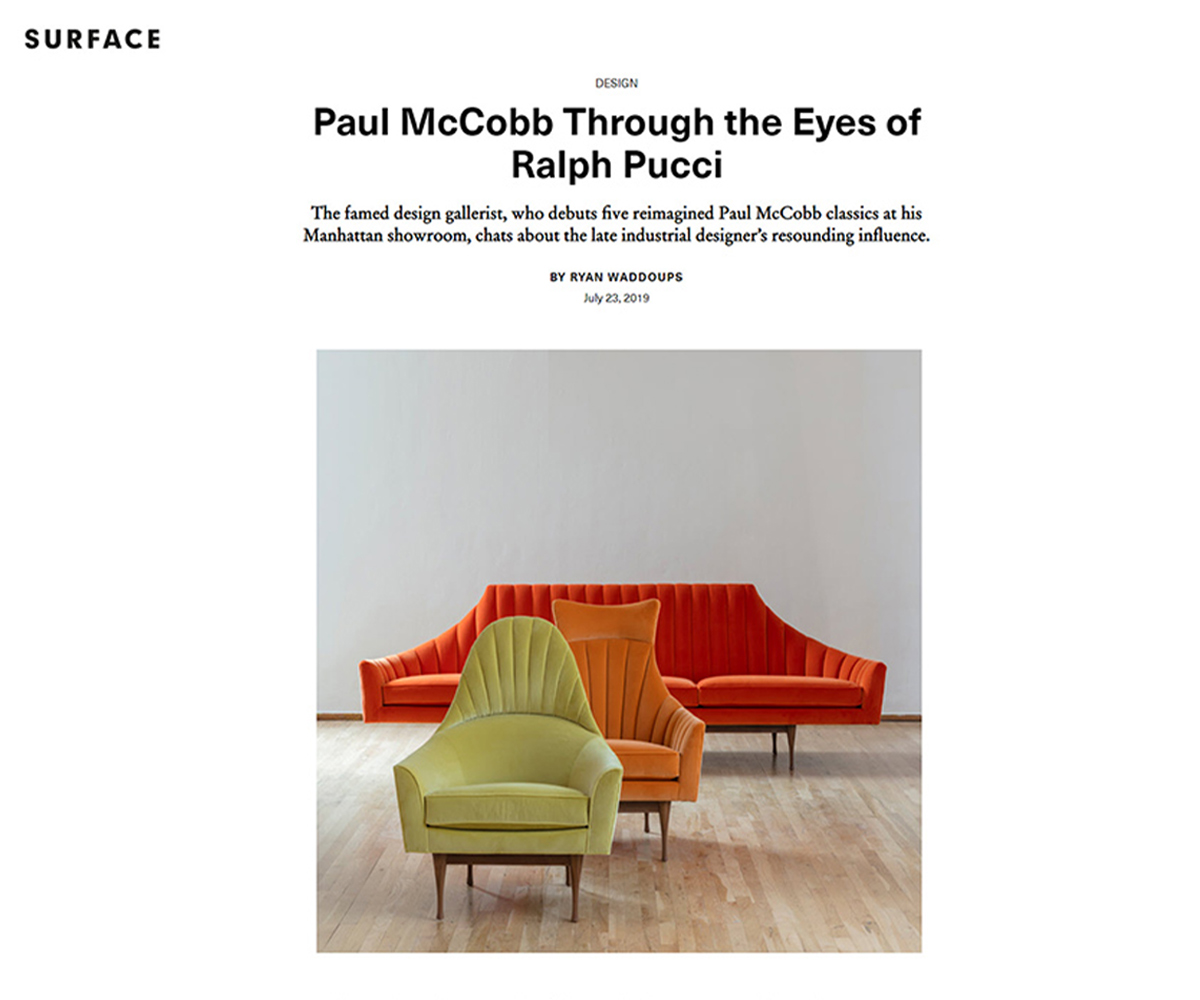 Paul McCobb Through the Eyes of Ralph Pucci

Paul McCobb may have trained as a fine artist, but his prescient insight into the rapturous influence of industrial design in the 1940s forms the cornerstone of his legacy. His 1950 release of the Shaker-style Planner Group, designed to fit snugly with the newly tight footprints of postwar buildings, gave rise to his eponymous design firm’s wide-ranging success and popularity. (The New York Times likens the Planner series to a mid-century version of Ikea.) Middle-class consumers and white-collar office workers alike warmed to McCobb’s alchemy of simple construction, clever proportions, and deft use of materials—particularly the marriage of birch, maple, and iron.

In 1962, McCobb debuted perhaps the most striking piece of his career: The Symmetric Sofa, defined by curving contours, a ribbed upholstered back, and slender wooden legs. Along with two club chairs released shortly afterward, the sofa fell out of production following McCobb’s untimely death in 1969. His furniture is now rare and fetches high prices at auction, but recently started seeing the light of day when Form Portfolios, a Danish-American company that revives mid-century modern pieces, acquired design rights from McCobb’s estate. Form also manages the estate of Jens Risom, the late Scandinavian furniture designer, represented by preeminent Manhattan design gallery Ralph Pucci.

When Form showed the gallery’s namesake founder an old photograph of Paul McCobb’s furniture, he was immediately entranced by the Symmetric Sofa’s sculptural elegance. After a lengthy period of restoration, Ralph Pucci is now debuting five reimagined editions of McCobb pieces at his gallery’s New York location until November. It’s the first time in five decades that the Symmetric Series will enter production, albeit with slight updates such as brand-new velvet upholstery. Each piece, however, remains rooted in McCobb’s distinct vocabulary. We chat with Pucci about McCobb’s influence, what sparked the revival, and why McCobb may be having a moment 50 years after his death.

The exhibition highlights the reintroduction of five recognizable McCobb pieces.

A company called Form bought the rights to the Paul McCobb pieces. They’re an important part of the equation. I have a working relationship with them because they work with the Jens Risom family who I’ve known for 15-20 years. Through the success of Risom, they recommended McCobb. I was slightly worried about offering another mid-century modern collection because there’s so much already out there—we’re always looking for something new and different at Pucci. When we see something that resonates, we ask: “How can we make it more modern and distinctly Pucci as opposed to simply duplicating something that McCobb or Jens Risom created in mid-century?”

So how did you make McCobb’s work more Pucci?

They showed me an old photograph of the sofa, which I thought was absolutely breathtaking. I remember thinking “This is fabulous, this is different, this is Pucci.” It wasn’t just another rehashing of the mid-century modern theme. In the right fabric and setting, it may even fool you as to when it was made, which is important. We created it and were pleased as could be with the result, so we moved onto the two club chairs. We had three fabulous pieces that were obviously Paul McCobb, yet they don’t shout mid-century modern. I said “If I can have these three pieces, I’m in.” Instead of using original fabrics, we used these very colorful, fun velvets.

Can you tell me about the coffee table?

I had a harder time with the coffee table, but it carries the spirit of McCobb’s era—its black leather oval definitely adds something. There’s also a wooden chair with touches of Japanese influence. It’s all done in wood with a thin cushion, similar to the other pieces. The pieces we picked sort of resonate and fit the Pucci spirit.

I recently visited your Los Angeles gallery, and after walking through India Mahdavi’s room, as well as seeing sculptural pieces by Pierre Paulin and John Koga, I can’t help but agree.

I’m really pleased with this because sometimes I start having second thoughts. “You think we should have gone with more typical colors?” Of course, I say “no,” but I always second-guess myself for a split second.

The velvets let each piece assert their sculptural qualities without feeling intrusive or overwhelming. The contours, when combined with the lush fabrics, are quite elegant.

Exactly. That may be the best word to sum the series up.

You had a gut feeling that McCobb was right for Ralph Pucci, but do you think this signals a wider renewed interest in his work?

Everyone’s looking for something they can feel comfortable with, and now it’s McCobb’s turn. We worked with Jens Risom and Vladimir Kagan when both were in limbo and needed to resurrect their careers. Benjamin Paulin of Pierre Paulin’s estate approached me and it felt so right in the moment—his work was almost fashionable. Whereas I don’t think McCobb is fashionable at the moment, but perhaps with time, the audience will become comfortable with his shapes.

What do you think today’s industrial and interior designers can learn from McCobb’s work?

McCobb’s body of work is very sculptural—particularly the pieces in this show. These sculptural qualities seem to underscore the most exciting projects today. They’re also elegant, fresh, and exploratory.

Ahead of their time?

Way ahead of their time. McCobb’s pieces look like they could have been designed tomorrow, yet they were designed 60 or 70 years ago.

The exhibition also pairs McCobb’s work with ceramic lighting by John Wigmore. Can you speak to the synergy between these two?

I thought perhaps ceramic lighting—in particular, the minimalist simplicity and Japanese spirit of John Wigmore’s work—would beautifully complement McCobb. I also like the idea of a legendary name paired with a younger artist who has his whole career ahead of him. The energy of old and new comes across in the show. John’s pieces are fabulous. It’s the first time he’s worked in ceramic, and I get the feeling that McCobb would love the work. I didn’t know him, obviously, but I did know Jens Risom very, very well. Not to conflate the two, but I remember visiting Jens’s home in New Canaan, Connecticut, and he had so many sculptural ceramic pieces and lamps. As soon as I saw McCobb’s work, I immediately thought of John Wigmore.

Risom and McCobb seem very like-minded as designers, so that doesn’t surprise me.

We always go through so many different iterations and evolving ideas, but I remember saying to myself, “I know Jens would like this.” I hope McCobb does, too.