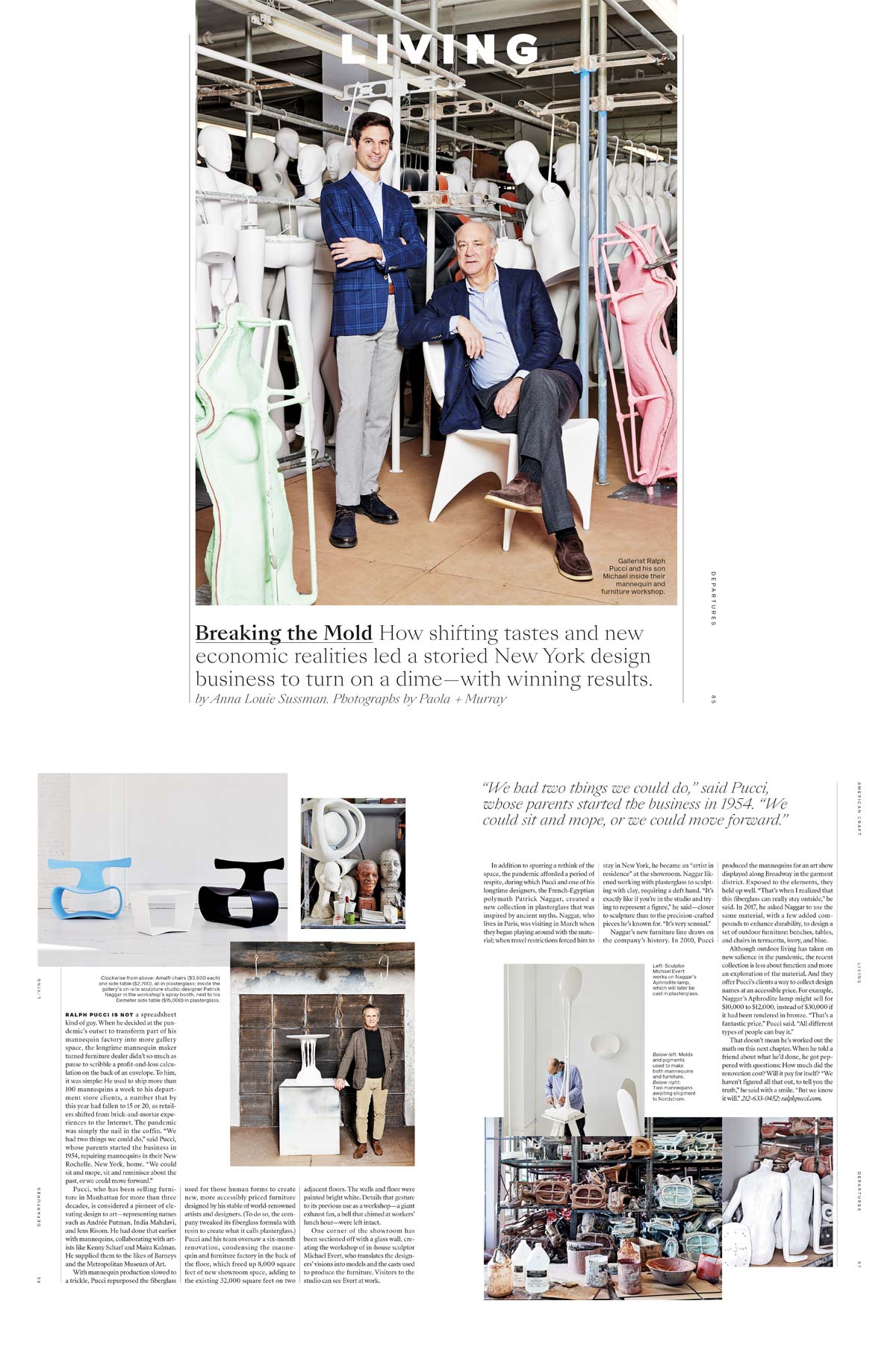 RALPH PUCCI IS NOT a spreadsheet kind of guy. When he decided at the pandemic’s outset to transform part of his mannequin factory into more gallery space, the longtime mannequin maker turned furniture dealer didn’t so much as pause to scribble a profit-and-loss calculation on the back of an envelope. To him, it was simple: He used to ship more than 100 mannequins a week to his department store clients, a number that by this year had fallen to 15 or 20, as retailers shifted from brick-and-mortar experiences to the Internet. The pandemic was simply the nail in the coffin. “We had two things we could do,” said Pucci, whose parents started the business in 1954, repairing mannequins in their New Rochelle, New York, home. “We could sit and mope, sit and reminisce about the past, or we could move forward.”

Pucci, who has been selling furniture in Manhattan for more than three decades, is considered a pioneer of elevating design to art—representing names such as Andrée Putman, India Mahdavi, and Jens Risom. He had done that earlier with mannequins, collaborating with artists like Kenny Scharf and Maira Kalman. He supplied them to the likes of Barneys and the Metropolitan Museum of Art.

With mannequin production slowed to a trickle, Pucci repurposed the fiberglass used for those human forms to create new, more accessibly priced furniture designed by his stable of world-renowned artists and designers. (To do so, the company tweaked its fiberglass formula with resin to create what it calls plasterglass.) Pucci and his team oversaw a six-month renovation, condensing the mannequin and furniture factory in the back of the floor, which freed up 8,000 square feet of new showroom space, adding to the existing 32,000 square feet on two adjacent floors. The walls and floor were painted bright white. Details that gesture to its previous use as a workshop—a giant exhaust fan, a bell that chimed at workers’ lunch hour—were left intact.

One corner of the showroom has been sectioned off with a glass wall, creating the workshop of in-house sculptor Michael Evert, who translates the designers’ visions into models and the casts used to produce the furniture. Visitors to the studio can see Evert at work.

In addition to spurring a rethink of the space, the pandemic afforded a period of respite, during which Pucci and one of his longtime designers, the French-Egyptian polymath Patrick Naggar, created a new collection in plasterglass that was inspired by ancient myths. Naggar, who lives in Paris, was visiting in March when they began playing around with the material; when travel restrictions forced him to stay in New York, he became an “artist in residence” at the showroom. Naggar likened working with plasterglass to sculpting with clay, requiring a deft hand. “It’s exactly like if you’re in the studio and trying to represent a figure,” he said—closer to sculpture than to the precision-crafted pieces he’s known for. “It’s very sensual.”

Naggar’s new furniture line draws on the company’s history. In 2010, Pucci produced the mannequins for an art show displayed along Broadway in the garment district. Exposed to the elements, they held up well. “That’s when I realized that this fiberglass can really stay outside,” he said. In 2017, he asked Naggar to use the same material, with a few added compounds to enhance durability, to design a set of outdoor furniture: benches, tables, and chairs in terracotta, ivory, and blue.

Although outdoor living has taken on new salience in the pandemic, the recent collection is less about function and more an exploration of the material. And they offer Pucci’s clients a way to collect design names at an accessible price. For example, Naggar’s Aphrodite lamp might sell for $10,000 to $12,000, instead of $30,000 if it had been rendered in bronze. “That’s a fantastic price,” Pucci said. “All different types of people can buy it.”

That doesn’t mean he’s worked out the math on this next chapter. When he told a friend about what he’d done, he got peppered with questions: How much did the renovation cost? Will it pay for itself? “We haven’t figured all that out, to tell you the truth,” he said with a smile. “But we know it will.”